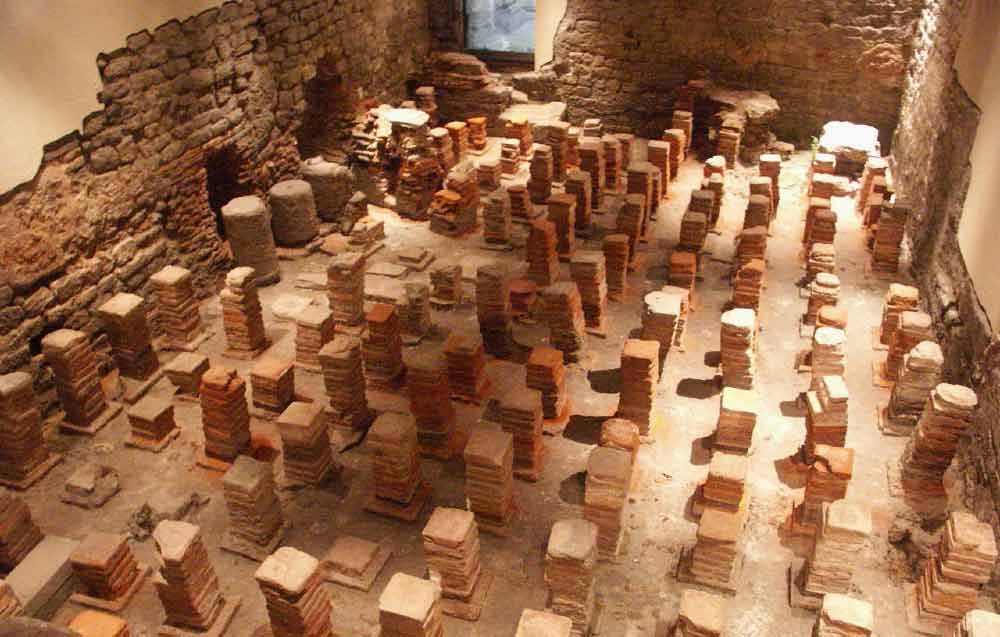 How the Romans Invented Floor Heating

The Romans, nearly 2,500 years ago, invented floor heating, and really, even by our modern standards, an amazing and efficient central heating system. So today, when floor heating is a great upgrade some homeowners are considering, the idea is absolutely classical.

The Romans produced a kind of under-floor heating called a hypocaust. They installed it in bathrooms, spas and many public buildings. It was a home upgrade for the wealthy. The way the hypocaust worked was simple in concept, but innovative and it grew in use and complexity during the centuries of the Roman Empire, plus the Romans took it to all parts of their empire.

The Latin word hypocaust comes from two Greek words for below and burn or fire. That quite simply tells us how it functioned.

How did Roman floor heating work?

The hypocaust relied upon the hot air that was produced by active, burning fires under a building’s floor. The Romans built buildings, or rooms within buildings, raised on pillars with open spaces and flues under the flooring. In the central space under the floor there was an oven which heated the air. The air passed through ducts, flues or channels. The flooring was laid on many rows or grids of supports about 80 centimeters high.

When villas, homes, official buildings or baths were being constructed, rooms would start being built with floors on a structure level. A system of chambers would be built so there was space between the floor of the room and the foundations for the oven and channels. Typically, a furnace would be constructed under one corner of a room. The heating system would generate enough heat for the space above. The air would flow in between the spaces in the flooring and the room would warm up. Hypocausts were used in walls as well.

Having this kind of heating in a home signified wealth. Servants had  to constantly keep the fires going. Putting an under-floor furnace in a building was a major expense.

When the Roman Empire died out in Britain and other parts of Europe, Africa and Asia, a lot of their technologies, including underfloor home heating, were just deserted. It would take centuries, or even longer, for homes to be built with this level of heating system again.

Hypocausts were used for home heating. Wealthy Romans enjoyed warm bathrooms. Other public buildings, most especially bath houses, in Rome and all over Italy and the larger empire had the technology.  They were used in private residences. It was a must for the country or vacation properties of the wealthier merchant classes throughout the Roman Empire. The ruins of Roman hypocausts are still around and visible all over Europe to this day. There are ruins in Italy, England, Spain, France, Switzerland, Israel and Germany, as well as in Africa.

The ceiling of the hypocaust was elevated by pillars, called pilae stacks. The stacks had a layer of ceramic tiles, followed by concrete, then the flooring, usually tiles, as the next layer. Hot air and smoke from the furnace flowed through under-floor space and up through clay flues called “caliducts.” The heat was controlled by the quantity of wood put into the fire.

A hypocaust in a building was difficult to operate, needing a great deal of labor and attention. It took constant work from servants. The ovens used a great deal of wood as fuel. This was one more reason why only a few homes and select public buildings had this kind of heating system.

A Roman historian and author, Vitruvius, wrote about the construction and operation of hypocausts in about 15 B.C. By this time, they had been in use for more than three centuries. He gave details and information about how fuel could be saved and maximized by having a specific hot room or “caldarium”. Vitruvius wrote about having caldariums for men and women next to each other heated by one same fuel source underneath, to improve the Roman public baths. He described a tool, a bronze ventilator, used for adjusting the temperature.

Want a Current Hypocaust System for Your Home

Nowadays, heated floor systems function via electricity or a central boiler. The way they work is pretty close to the way the Romans did it. The central heating boiler heats the water which fills up the pipes under the flooring. The pipes are laid in a particular pattern to give off warmth uniformly and consistently across the space, and the heat is easily controllable.

Whether you care about ancient civilizations or not, modern homeowners might have been considering floor heating for their homes for awhile. Under-floor heating is environmentally helpful, is efficient on an energy bill and gives you and your family a more comfortable home. The radiant warmth from the floor is soaked up by other surfaces in the room. This becomes a very effective temperature distribution method. Other types of home heat systems aren’t as effective. They must be very hot, which needs extra time and energy usage, before they raise a room’s air temperature in a significant way. Also, in homes with more traditional heating systems the hot air, of course, rises to ceilings or upper floors, and the coolest part of a house or room is typically low along the floors.

At South End Heating and Air we specialize in HVAC and furnace repair, call us for a free consult. We’ll evaluate your system and help make recommendations for optimum value. After all, we want to keep you cool all summer long and warm in the winter. Just schedule a visit with one of our technicians to talk about how we can help with your heating needs. Would you like to learn more options our techs can help you with? Give us a call 704-684-5339.

previous
Does my Heat Pump Have a Defrost Cycle?
next
Does a Plumber or an HVAC Technician Repair Natural Gas Lines?